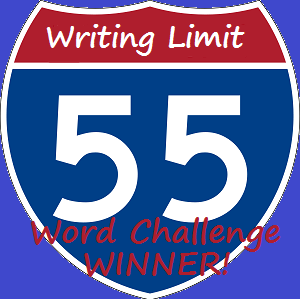 Great entries this week and we saw some new faces! Thank you everyone. As usual I wish I could have chosen everyone. Unfortunately I can't. So without any further ado...
Honorable Mentions:
@postupak I love this! The feeling of being safe, locked away where no one can hurt you… except you locked yourself in with the thing you are trying to hide from. Classic!
@Janeen_FluffyJ Great entry! You did a wonderful job of giving the reader hope and then the realization that  even though the chain was gone, her tormentor would always be with her.
@PurpleQueenNL This story had a great feel to it. I really want to read more!
Winner:

@bullishink: Wow! I’m a Planet of the Apes geek so of course this story put me in mind of the whoe franchise. Great job, Ruth!
Garza stopped short of the perimeter. The padlock swung free. He had an hour to find her before involving outside agencies. Shackling that wild brilliant mind was criminal but the primate was too valuable to Global and too dangerous to the public to roam free.
I think I have your email address, so I will send you the books shortly! Do you need Kindle or Nook?
Again, thank you to everyone that entered! See you all next week. 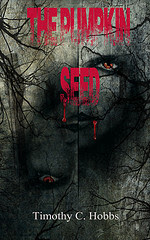 “I am a drinker of human blood and an eater of human flesh, a monster dressed in the skin of a man.” So states Charles, the main character of the novel, after being infected with a virus transmitted by an insect vector.

The Pumpkin Seed opens in India near the Nepal border in the late 17th century. A commissioned officer of the East India Company is seeking a profitable new trade route into China. Indian bandits of the Thuggie clan attempt to stop this further invasion by the British and release a plague of insects, which carry a unique virus. This organism not only infects humans, it transforms the chemical and physical nature of the host’s body. Longevity, resilience and the need to feed on human blood and flesh make the host an efficient killing machine, especially in regard to the human race.

The novel follows the characters through 17th and 18th century England and India, culminating in present day Austin, Texas. Set in the orphanages of London and in the vile body snatching trade, a host of characters, who are as despicable as their deeds, search for the truth and a cure for their malady.

The Pumpkin Seed takes us through the vices of greed, hate, love and despair and creates a modern novel that puts colonialism in the spotlight and asks difficult questions about this generation’s guilt for the crimes of its ancestors. This novel is a classic vampire tale with a twist, told beautifully from the point of view of the vampire.
Available on Amazon and BN
Posted by Lisa at 11:10 AM