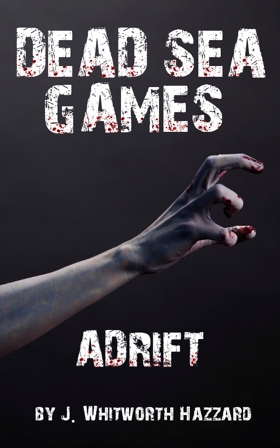 Okay, so zombie lover that I am, I bought a book last week, Dead Sea Games: Adrift, but J. Whitworth Hazzard. Some of you that hang on twitter might know him better as ZombieMechanics. I knew I liked James' flash fiction, but I had never read anything of his that went beyond a hundred words or so. You know, that can be iffy... some people can write flash but to stretch a plot out, that can be a different story. And I'm a bit picky with my zombie horror. So I was a little leery and excited at the same time. Because the plot sounded captivating.
So what is the story about? Dead Sea Games: Adrift is a post-apocalyptic serial set in a fictional Manhattan Island overrun by zombies. This inaugural episode explores the world of Jeremy Walters, a teenager living with his mother among the survivors of NYC who have taken the rooftops and penthouses of lower Manhattan as their sanctuary against the undead.  The novelette is equal parts action, adventure, and suspense and explores the concept of a world where heroes were extinguished by their own self-less actions. How does a new generation of teens learn to face overwhelming chaos and keep their humanity in a world where it’s every man—or woman—for themselves? How do the orphans of the Emergency build a future when there is no hope, no rules, and no escape?
Sounds exciting, right? Well it is. Jeremy, AKA Death Wish by those that like him and those that don't, is a 15 year old with an attitude. His mother tells him to stay in the apartment. He doesn't. His mother tells him to stay out of trouble... he doesn't. Sounds like most 15 year olds, but most teenage boys except most 15 year old boys don't spend their days fighting zombies and almost dying multiple times.
One of the things that drew me into this book was the dialogue. I found it believable and since I quickly developed a picture in my mind of what Jeremy looked like. (I won't tell you, because I want you to develop your own image.) There was one point, towards the end, when I found myself chuckling.
The story took off at a fast pace and didn't let up. One thing after another continued to happen to this teen. Some of it was pretty unbelievable, but then again we are talking about the zombie apocalypse. If the dead suddenly get up and start walking, anything can happen. And it does.
I did find the action scenes sometimes a bit rushed, but that may be personal taste. I'm giving Dead Sea Games: Adrift 4 Stars.
Check out the excerpt below and then come back tomorrow for 55 Word Challenge. J. Whitworth Hazzard is judging and I am offering Dead Sea Games: Adrift and the second in the series, Dead Sea Games: Exiled, as the prize.
Excerpt
…

Several zombies stumbled over the bodies of their compatriots, and I put them down as soon as they hit the concrete. The barriers were stacking up now. One, here. Two, there. My lead pipes dripped with black gore, bits of hair and flesh clinging to the sticky mess.

The masses closed in. In another minute, there would be no place to go.

"Behind you! Two under the cars..." Shorty's voice carried over the din of the crowd roaring and chanting for my blood. He wouldn't mind seeing me die, either, but he had beer and cigarettes riding on the outcome, as well as his father's payment.

Two zombies crawled from under the burnt-out SUVs and grabbed at my ankles from behind. I dropped the heel of my boot on one and cracked open its skull. The other had me in its filthy grasp and pulled itself in for the bite.

"No you don't, creeper." I dropped the butt of the lead pipe and slammed the deadhead to the concrete, face-first. I could feel its teeth and jaw shatter under the impact, rending it impotent for the time being.

There was no more time to think or listen to the warnings from the crowd. The deadheads attacked from every angle. Every cranny and crevice they could fit through in the wall of bodies showed a new, dripping maw. I stopped thinking about it and let the rage escape.

I was angry. Angry about everything. Angry my dad and sister were out there, wandering with the deadheads. Angry my future was gone. Angry that my life sucked. But mostly, I was angry that I was still alive. I'd tried every risky stunt and taken every stupid chance I could in the last year.

But God kept saving me.

Somewhere in the flying gore, and over my own screams of fury, I heard the Gamemaster.

"One minute! Get the rope ready."

Cold fingers clawed at me from every direction. Only my makeshift barricades kept them from dog piling me. I kicked, punched, and smashed with abandon, destroying everything I could see. One grabbed hold of my shirt at the back and wouldn't let go. I broke the arm, but the fingers tight. Another zombie rolled over the pile and landed, curled around my feet. It twisted and writhed to get purchase on my flesh.

"Time! Holy shit, he did it," the Gamemaster yelled. "Get him out of there."

A braided rope fell over my shoulder, and I grabbed on. I kicked my feet to get away from the deadhead wrapped around me, but it wasn't letting go.

"Pull," the Gamemaster shouted, and the crowd pulled the rope, now wound around my arm. I shot ten feet above the pile of bodies, but the zombie attached to my foot rode up with me. She gnawed at my boot, looking for flesh. Her rotten teeth and black mouth were going to sink into me before I could get back to the balcony. 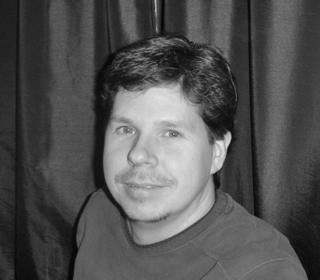 J. Whitworth Hazzard lives in the vast cornfields of Illinois with his wife, and four nearly perfect children. A Geek-for-Hire by day, J. Whitworth has worked for over a decade fixing minor computer problems, some of which he did not even cause. He prepares technical documents for a living and tries not to include any zombies in reports on server upgrades and network outages (although not always successfully).

Dr. Hazzard has a PhD in molecular biophysics that he now uses to figure out how to scientifically justify the existence of mythical creatures. Trained in science and critical thinking, J. Whitworth spends his leisure time writing fiction that would make his former professors cringe. He has been a life-long writer and has spent more than his fair share of time writing about all kinds of ridiculous things. His dream of writing for a living started in the 5th grade when his five page story “The Blood and Guts 500” entranced and thrilled his classmates. His passionate prosody received a standing ovation and from that day forward he was hooked on the art of story telling.