Some Things Are Meant To Be

This is written for Anna Meade and the Dark Fairy Queen Writerly Bridal Shower. Congratulations Anna! I wish you and your future husband all the best.
Some Things Are Meant To Be
By Lisa McCourt Hollar 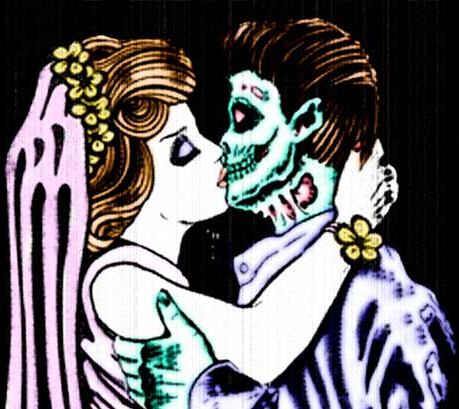 Ruth stared into Norman’s eyes, her knees buckling at the love she saw there. It had been a long road for them. On more than one occasion she despaired they would never marry. But now here they stood, in front of friends and family, ready to commit their lives to each other. Her father had even walked her down the aisle. Ruth had never thought that would happen, not after the explosive reaction he’d had when Norman first asked for her hand in marriage.
“Over my dead body,”  Her father yelled, chasing Norman off their property, with the aid of his shotgun and a generous helping of rock salt.
“Daddy! He’ll never come back now.”
“That’s the idea.”
“Harold,” her mother interjected, “our daughter is in love. Remember how my father felt about you?”
“Yeah. He chased me off with buckshot, that rat’s lucky I only used rock salt.”
Ruth fell at her father’s knees.  “He wants to marry me, daddy. Please give your blessing. Otherwise, I’ll run away and we’ll get married without your say so.”
Harold brushed her off and Ruth ran to her room, tears filling her eyes. Huddling on her bed, she listened to her parent’s argue.
“She’s nearly twenty-one, what are you going to do, keep her locked up for the rest of her life?”
“If I have too.”
“Harold…”
“You seem to forget, Carol, Norman aint right in the head. Just because he’s the only one courting our daughter at the moment…”
“He wasn’t the only one, until you drove off all the others. Don’t do this, Harold. He can protect her. He’s good with that arrow and you know it.”
“Arrow,” Harold scoffed. “The damn Walkers surround them and Ruth is a gonner.”
“Harold…” Carol’s sounded frightened, “I saw something moving outside.”
“Stand back.”
There was a loud crash. Ruth went running to the door to go help her parents, but the door was locked. She pounded on it, screaming for someone to let her out, but the only answer she got was her mother’s screams and the sound of her father’s shotgun.
***
“They might not be dead,” Anna offered. Ruth smiled at her friend. She knew the girl was only trying to help, but the facts were, if the Walkers had taken her parents, they were dead. She was grateful for Anna though. She had shown up the next morning and let Ruth out of the room. She told Ruth that most of the survivor camps had been run over. An organized attack by the Walkers.
“There he is!” Ruth pointed towards Norman, relief washing through her. “Come on, Anna.” Ruth took off for the tree line, not understanding why Norman was screaming for her to run. She was running, wasn’t she?
***
“What are you waiting for?” Ruth looked at the pastor.
“Ruth, you don’t want to do this.”
“Now you sound like Anna.” Next to her, Anna, her Maid of Honor, sniffled.
“They’re dead. This isn’t a wedding, it’s a funeral. Yours too, if you go through with this.”
“Mine too, if I go through with this,” Ruth mimicked, pointing her shotgun at the preacher. “I’ve lost everything, I’m not losing Norman too. Now get on with it.”
“Ruth, please…”
“Anna, shut up. He got bit saving you. Next time someone yells run, try running.”
She looked around, most of her friends were there except for Tanya. She’d struggled against the collar and decapitated herself. Ruth had never liked her much anyway. She’d dated Norman once.
Looking over the scenery, Ruth only saw the decorations she had painstakingly put up. Pictures she had collected over the year and stored in her hope chest were tacked to the trees. Her father moaned, pulling against the chain that kept him in place. Ruth smiled at him, tears in her eyes. She knew that he was in there somewhere, probably angry that she was defying him.
Repeating after the pastor, she said her vows, placing a ring on Norman’s finger and then again on her own.
“Until death do us part,” she said. Ruth knew later, after she unchained Norman, he would eat her, but for now they were together, as they should be.
Word Count: 700
Posted by Lisa at 4:13 PM