B is for Bed Bugs.

Day 2 of the A to Z Blog Challenge.
B is for Bed Bugs
Exterminating Circumstances
by Lisa McCourt Hollar 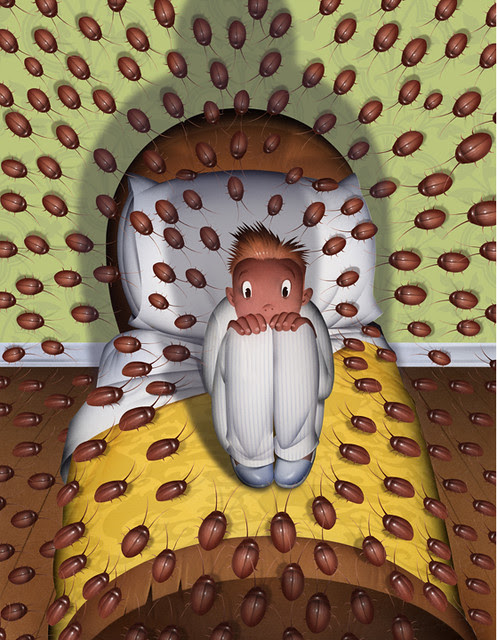 “What the hell… owe!” Thomas rubbed the back of his head, being careful this time not to hit it on the heating pipe hanging over his head. Molly glared at him, unfazed by the sound of the prison alarms shrieking around them and then kicked him in his happy spot. Thomas reacted by punching her in the face, adding another bruise to her already swelling face.
“You better watch yourself, bitch. I’ll be back to finish this.”
“Hey wait, you can’t leave me here.” Molly struggled against the zip ties he’d fastened around her wrist and the metal bed frame. “They’ll wonder where I am.”
The guard looked back at the prisoner and chuckled, “Aint no one going to miss you.” He then shut off the lights and left. He hurried because he was in section C of the Women’s Penitentiary. He was supposed to be in Section A. Frank had better cover for him, since he’d paid for him to look the other way while he took Molly to the boiler room for her training. His ankle screamed as he climbed the steps, already swelling from where Molly had kicked him when he’d first climbed on top of her. Damn uppity whore needed to know her place.
“Where have you been?” Frank asked, when he rounded the corner. “Cain is looking for you.”
“Never mind where I’ve been, what’s going on?”
“Prison break,” Frank said, and then turned his gun on Thomas and shot him in the shoulder.
When he woke up, he was tied to the bed in the boiler room. Molly stood over him, a pipe in her hand.
“What the hell…”
Molly swung the pipe forward, hitting him in the face. Blood filled his mouth from broken teeth.
“Don’t speak,” Molly said.
“Are you ready?”
It was Frank standing behind Molly. Thomas opened his mouth to speak, but shut it when Molly lifted the pipe.
Frank shook his head. “You raped the wrong woman… Meghan.”
Thomas’s eyes widened. He remembered the cunt. A year before, she’d reported him to the warden. He’d almost been fired over it, but then Meghan had hung herself and the problem went away.
“Meghan wrote me,” Molly said. “She told me she was afraid you would kill her. When she died, I knew. I also knew no one would do anything about it. No one cared about Meghan except for us.”
“She was our sister,” Frank said. “Different father’s, so no one knew. I was at a different prison at the time, but finding a transfer wasn’t hard. You’re a dick, Tom. No one wants to work with you. And faking paperwork for a new prisoner wasn’t that difficult.”
The two turned to leave.
“Where are you going?”
“We’re leaving,” Molly said.
“You can’t just leave me here.”
“I think we can. No one’s going to miss you. Oh… we left you a little gift in the bed.” Then she shut off the lights.
Thomas lay there, waiting. He knew eventually someone would be down. Maintenance checked the boiler room on a schedule. He planned his time there around the schedule. He did worry about what Molly meant by a little gift. He was thinking about that when he felt something crawling on his arm. Then he felt more creepies on his leg, under his pants and then crawling under the waist band.
He struggled to loosen himself from the ties, but they were strong… his own personal stash, he didn’t want anyone managing to get loose. Whatever had crawled under his waistband was now swarming over his dick, tiny points digging into the skin.
His face was also crawling with whatever was swarming him. His imagination went wild, imagining rats chewing his eyes out. These weren’t rats though, they were smaller… some kind of a bug. Did cockroaches eat your skin?
“We left a gift for you on the bed.”
Bed Bugs. The word came to him and he shook his head, trying to knock them off. How could there be so many? He opened his mouth to scream and bugs poured in, biting him on his tongue and sliding down his throat.
Eventually he passed out.
***
“He was dead when we found him.”
“Why didn’t anyone report him missing?” The warden looked angry.
“We didn’t know,” Sgt. Cain said. “We had a drill earlier and when he didn’t show up I checked… he’d clocked out early.”
“What do you mean he clocked out early?”
Cain shrugged. Frank spoke up, “It’s my fault sir. He told me he wasn’t feeling well. I told him he should go home. I thought he would report first.”
“Bed bugs… and this room. There were complaints about him.”
“I know, sir,” Frank said.
“Are any of the prisoners unaccounted for?”
Cain started to speak and then changed his mind. He’d gone through the roll call. He could have told the warden that the new prisoner, Molly was missing, but there was no record she’d ever been there.
“No,” he said instead, “all prisoners are accounted for.”
“It could be an accident,” Frank said. “He was a bit… odd. He could have used his teeth to tie himself to the bed and then not been able to get loose when he needed.
“You’re saying this could have been an unfortunate… accident?”
“I’ve heard of stranger things. Some actor a while back killed himself by asphyxiation when he accidently hung himself.”
The warden shuddered. “And the bed bugs?”
“Were hungry.”
The warden closed his eyes. “Okay, we don’t want this getting out. Clean the room up and for Pete’s sake, call an exterminator.
Posted by Lisa at 4:43 PM

Email ThisBlogThis!Share to TwitterShare to FacebookShare to Pinterest
Labels: A to Z Blog Challenge, Bed Bugs